The ongoing Russia-Ukraine conflict has now entered into a “decisive phase”. The most recent speech of Russian president Putin clearly signaled a “negotiated settlement” in which Turkey may play an important role.

However, interestingly by “signing a deal” for the supply of latest military equipment from India, “warmongerings” of Armenia and India has now reached to a “strategic level” which would change the security equation in South Caucasus. Both countries enjoy a treaty of friendship and cooperation signed in 1995.

According to Indian news outlet Economic Times (September 29, 2022) Armenia ordered heavy weapons from India worth an estimated $245 million. It includes missiles, rockets and ammunition amid escalating tension between Armenia and Azerbaijan over the Karabakh region, which was largely liberated by armed forces of Azerbaijan from Armenian illegal occupation in late 2020.

The Economic Times said the order also includes the first ever export of the indigenous Pinaka multi-barrel rocket launchers that are also used by the Indian army, as well as anti-tank rockets and a range of ammunition.

Furthermore, India in 2020 had also supplied four Swathi radars to Armenia during the Karabakh war with Azerbaijan. The deal was significant because Russian and Polish vendors were also in the race to sell radars to Armenia. However, Armenia was defeated and a peace treaty was brokered by Russia and Türkiye.

Armenia illegally occupied Karabakh and seven adjacent regions Lachin, Kalbajar, Aghdam, Fuzuli, Jabrayil, Qubadli, and Zangilan a territory internationally recognized as part of Azerbaijan since 1991. Moreover, Armenia has had been indulged in systematic ethnical discriminations, racial genocides and socio-economic marginalization of peaceful people of Azerbaijan living in these areas for centuries. However, 44 days Patriotic War of 2020 proved “lethal” to all the conspiracies of Armenia and all these areas were subsequently “liberated”.

In the near past, Armenia “waged a war” against peaceful Azerbaijan and started large scale “clashes” in the Karabakh region on Sept. 27, 2020. The Armenian army launched attacks on civilians and Azerbaijani forces, violating several humanitarian cease-fire agreements.

On its part, Azerbaijan armed forces launched a counter-offensive operation, later dubbed “Iron Fist,” which led to the 44-day conflict ending with the liberation of Azerbaijani lands from the occupation of the Armenian forces. The fighting ended with a deal brokered by Russia.

Most recently, during the month of September 2022, Armenia has once again “spoiled” the trilateral peace agreement by violating the border security. Furthermore, Armenia continued its “military misadventures” against Azerbaijan forces and civilians through intensive mortars firing on the deployment positions of the Azerbaijani Army in Kalbajar, Lachin, Dashkesan and Gadabay fronts during the last few months which spoiled the peace agreement. Nevertheless, Azerbaijan showed great restrain.

Situation remained tense on the borders. According to latest official news more than 70 soldiers were martyred in unprovoked attacks by Armenia. Armenia also approached the Collective Security Treaty Organization (CSTO) against the so-called external aggression of Azerbaijan but failed miserably. It also approached the EU and cried for help but did not receive any pledges because of its fascist scheme of arrangements.

The Indian external affairs minister S Jaishankar had a meeting with Armenian foreign minister Arara Mirzoyan during the 77th session of the UN General Assembly in New York 2022. During the meeting on 24th September, Armenian minister Mirzoyan briefed about the military situation on borders. Afterwards, both countries signed a military deal.

India is now set to export missiles, rockets, and ammunition to Armenia. Among other things, India will also export the indigenous Pinaka multi-barrel rocket launchers to Armenia to aid the nation against Azerbaijan. It will be the first export of the Pinaka rocket launchers.

For diversifying its military exports, India is following a new paradigm “Make In India” and its government is actively assisting in securing international military orders. The Modi government has set a target to sell defence systems worth Rs.35,000 crore overseas by 2025.

The rocket launchers are mounted on Tata trucks. Each Pinaka battery has six launchers, 12 rockets, and the DIGICORA MET radar. Each of the launchers can fire in separate directions, as they have their own computers allowing them to function independently. All the launchers can be fired at once, or only some of them can be fired, as per requirement.

It seems that “geo-strategic dimensions” of South Caucasus are going to be changed and “re-adjusted” very soon. The trans-regional military deal of Armenia and India has numerous “spillover” geopolitical and geostrategic “repercussions” for the region and beyond. New military partnership between two “hegemonic countries” is wake-up call for Azerbaijan, Türkiye and even Pakistan having trilateral security dialogue.

The Indian Pinaka missile launcher is the first-ever indigenously developed military equipment to be sold to a foreign nation. Additionally, it is expected that the Armenia-India deal will have a significant geopolitical impact on Armenia, Azerbaijan, and India and its neighbors as well, since it will directly involve India in the struggle against Azerbaijan, which has close ties with Türkiye and Pakistan.

Right from the beginning, the government of Pakistan took a “principled stance” and did not “recognize” Armenia because of its “fascist” conduct and illegal occupation of Karabakh region. Both countries have been supporting each other on the issues of Kashmir and Karabakh on different regional as well as international forums. Moreover, Pakistan rigorously participated in the “Three Brothers Joint Military Drill” during 2021 which further strengthened scope of bilateral and trilateral military cooperation among the three brothers.

Same is the case of Türkiye which has been “nurturing” Azerbaijan since its independence through moral, political, economic and military means. During 44 days patriotic war, Ankara vastly increased its military cooperation with Baku and supplied its armed Bayraktar TB2 drones that Azerbaijan used to devastating effect against Armenian ground forces.

Moreover, the Turkish and Azerbaijani air forces launched the “TurAz Qartalı 2022” & “TurAz Eagle 2022” joint flight-tactical exercises. According to the Azerbaijani Defense Ministry “the study of interaction and combat interoperability, as well as the carrying out of search-and-rescue measures will be fulfilled during the exercises”.

Turkish defense industry representatives revealed their future plans to use joint production of the cutting-edge military equipment. Turkish Defence Industry Minister Ismail Demir said relevant negotiations were underway with the Azerbaijani authorities to team up for the production of aircraft. Selcuk Bayraktar, CEO of the Turkish Baykar Technology Company, which produces Bayraktar and AKINCI combat drones, also confirmed the interest in developing and manufacturing the cutting-edge aerial devices in Azerbaijan.

Interestingly, the Minister of Defense Industry termed development of cooperation with Türkiye, Israel and Pakistan essential and priorities of the Military Industrial Complex of Azerbaijan which has great geostrategic significance.

Azerbaijan’s relations with Türkiye have now entered a “new phase” following the signing of the “Shusha Declaration” in Azerbaijani city of Shusha on June 15, 2021. The Shusha Declaration addresses coordinated and joint Turkish-Azerbaijani activities in the event of a threat or aggression by a third state or states against the independence, sovereignty, territorial integrity, inviolability of the internationally recognized borders, or security of each countries. 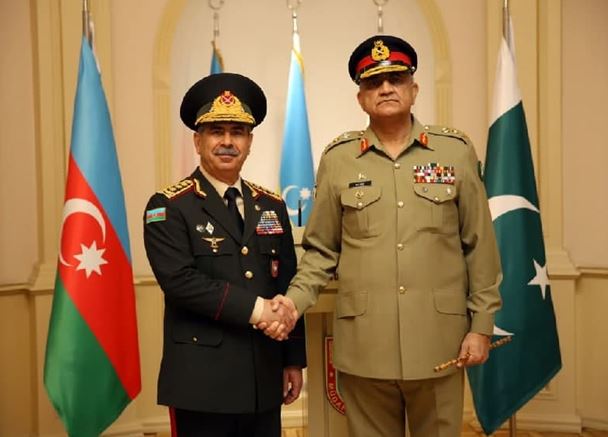 Pakistan, Türkiye and Azerbaijan also signed “Baku Declaration” which emphasized the need to strengthen cooperation among the three countries, based on cultural and historical ties, mutual respect and confidence. It also emphasized Türkiye, Azerbaijan and Pakistan’s roles in building peace, stability and development in their regions.

To conclude, Azerbaijan, Türkiye and Pakistan should further strengthen their “security cooperation”. Both countries showed “solidarity” and “supported” Azerbaijan during the 44-day war against the Armenian armed forces during 2020.

Good thing is that, Azerbaijan, Pakistan, and Türkiye maintain a “robust trilateral relationship” that is increasingly important to the security, economic, and diplomatic interests of all three countries.

The “war theater” of South Caucasus has now become more complex and complicated as India elected to become more pronounced in its support of Armenia while keeping its “principled position” on the Karabakh issue.

After a new round of border clashes between Armenia and Azerbaijan on September 13-14 2022, India’s foreign ministry, referring to Azerbaijan, called upon the aggressor side to immediately cease hostilities. Now military deal between India and Armenia has worsened the geostrategic situation in the region.

On the other hand, in August 2022, Azerbaijan’s National Defence University and Pakistan’s National Management College discussed possible areas of cooperation in the field of military education. Hopefully, the military, military-technical, and military-educational spheres will be further strengthened between both the countries.

Baku is also interested in Pakistan’s JF-17 fighter jets (latest version) as one of the best options to boost its post-war air force capabilities.

Critical analysis reveals that Türkiye and Pakistan can do more to help Azerbaijan to further “modernize” and “train” its armed forces.  Seemingly, peaceful trilateral military cooperation is “getting momentum” among Türkiye Pakistan and Azerbaijan. One aspect of this trilateral cooperation is military-to-military relations and improving the combat readiness of the Azerbaijani army and contributing to the creation of a modern and professional army and Special Forces.

There have already been several agreements on military and defense cooperation between Türkiye, Pakistan and Azerbaijan in recent years and according to many creditable diplomatic sources and international media reports now they are pushing a more serious framework.

At the current stage, this trilateral cooperation can depend on complementary measures where Türkiye and Pakistan can contribute significantly in terms of R&D, design, and manufacture of weapons to meet Azerbaijan’s security needs. At a later stage, Azerbaijan can be an effective partner in joint production.

In this regard, the trilateral security dialogue of Azerbaijan, Türkiye and Pakistan should also extend their cooperation in achieving a codified security system. All three countries operate noticeably different military hardware. Türkiye and Pakistan armed forces have long operated American, European and indigenous equipment while the Azerbaijani military still uses a lot of Russian equipment.

There is an urgent need to change the entire canvas of war theater in South Caucasus especially after the recent increasing military partnership between India and Armenia because Türkiye’s assertive role as regional and trans-regional balancing act and emerging Middle Power Status would be compromised in the region.

The policy maker’s especially military strategists of Pakistan should also forge a comprehensive security policy in the region and try to further strengthen military cooperation with Azerbaijan in the days to come. It is high time that the trilateral security partners should strengthen their cooperation in drones, tanks, anti-missile systems, ammunitions and electronic war-fare.

Moreover, trilateral cooperation in latest radar and stealth systems should be also included in the formation of military cooperation among three countries.