CCTV: Yesterday, China and Pakistan both strongly condemned the terrorist attack on a van of the Confucius Institute at the University of Karachi. Can you tell us more about the relevant situation and the emergency response work?

Wang Wenbin: We once again express deep sorrow for the victims in both of our two countries and sincere sympathies to the injured and bereaved families.

This suicide terrorist attack is premeditated and targeted at Chinese citizens. It is egregious and outrageous that the terrorists targeted teachers who were dedicated to carrying forward human civilization and promoting cultural exchanges. The Chinese side expresses strong condemnation and grave indignation over this.

The people and their lives always come first. The Chinese government always attaches great importance to the safety of Chinese citizens and institutions overseas. As required by State Councilor and Foreign Minister Wang Yi, the Chinese Foreign Ministry and diplomatic missions in Pakistan activated the emergency response mechanism and sent officials to the site immediately after the incident. Diplomats at the Chinese Foreign Ministry and diplomatic missions in Pakistan asked the Pakistani side, through multiple channels, to take all-out measures to treat the injured and handle the follow-up matters of the victims, immediately make thorough investigation of the incident, and apprehend and punish the perpetrators to the full extent of the law. In the meantime, the Pakistani side needs to take more robust measures to ensure the safety of Chinese citizens and institutions in Pakistan and prevent such incidents from happening again. The Chinese diplomatic missions in Pakistan also reminded Chinese institutions and personnel to be more vigilant, scale up security protocols and protect their own safety. Line departments and sub-national governments here in China are also taking swift actions in a coordinated manner to ensure sound emergency response. Yesterday, the Chinese Consul General in Karachi went to the hospital to visit the injured Chinese teacher, who is receiving proper treatment and recovering.

Pakistani Prime Minister Shahbaz Sharif visited the Chinese Embassy in Pakistan last night to convey condolences, stressing that the Pakistani government is mobilizing all resources to conduct an in-depth probe into the incident. “We won’t rest until the culprits are hunted down and given exemplary punishment,” the Prime Minister said. He also assured complete cooperation with China to ensure sound work in handling the follow-up matters of the casualties and take further steps to strengthen the security work for Chinese personnel, projects and institutions in Pakistan. He said his government will never allow any force to undermine the great friendship and cooperation between Pakistan and China.

I would like to stress that terrorism is the common enemy of mankind. The blood of the Chinese people should not be shed in vain. China firmly supports Pakistan’s counter-terrorism efforts. We will work with Pakistan to hunt down the perpetrators, bring them to justice and make them pay a heavy price.

We once again remind Chinese citizens, companies and projects to follow closely the local security situation and meticulously guard against security risks.

AFP: Sticking with the theme of yesterday’s terrorist attack. Is the foreign ministry able to provide any more information on the motivations behind this attack? What is the health status of the injured Chinese national at the moment? Is China concerned that the threat of terrorism may affect its economic projects in Pakistan, especially in the Balochistan region?

Wang Wenbin: As I just said, the injured is receiving proper treatment and recovering.

I also want to stress that the iron-clad friendship between China and Pakistan is unbreakable and any attempt to undermine China-Pakistan mutual trust and cooperation and the building of the China-Pakistan Economic Corridor will never succeed. The terrorists will pay a heavy price for their crimes.

Beijing Youth Daily: According to reports, US Assistant Secretary of State for East Asian and Pacific Affairs Daniel Kritenbrink warned of a “complete lack of transparency” of the security deal between China and Solomon Islands the other day. The head of the Office of National Intelligence of Australia said China’s motives were particularly unhelpful for the region. Do you have any response?

Wang Wenbin: The normal security cooperation between China and Solomon Islands, two sovereign states, is consistent with international law and international customary practice. It is legitimate, lawful and irreproachable.

The US and Australia’s accusations against China are pure double standards. The US shows no openness and transparency when it conducted nuclear tests and dumped nuclear wastes in the South Pacific region and when AUKUS opened up the Pandora’s Box of nuclear proliferation in the Asia-Pacific region.

The US and Australia should respect the rights and freedoms of South Pacific island countries to have exchanges and cooperation with other countries. The attempt to pursue the Monroe Doctrine in the South Pacific region is unpopular and will lead to nowhere.

AFP: A follow-up on Solomon Islands. On top of the remarks by US officials, Australian Home Affairs Minister said it is very likely that China will put troops in Solomon Islands. Do you have any comment on this? Does China plan to disclose the whole treaty? 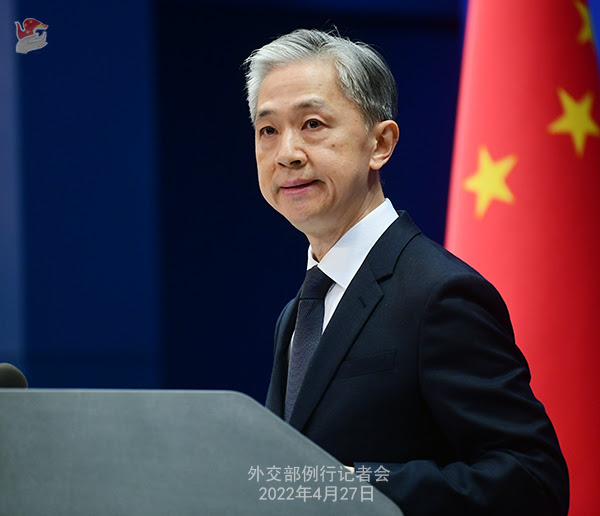 AFP: According to reports, China’s Defense Minister General Wei Fenghe is going to visit Iran. Could you offer more information on the visit?

Wang Wenbin: I’d like to refer you to the Ministry of National Defense for this question.

AFP: Yesterday, a US guided-missile destroyer made a transit through the Taiwan Strait. Do you have any comment?

Wang Wenbin: You may have read the statement on the issue made by the spokesperson of the PLA Eastern Theater Command. We hope the US can abide by the one-China principle and stop such dangerous provocations in the Taiwan Strait.

Associated Press of Pakistan: A follow-up on the Karachi terrorist attack. After the incident, Prime Minister Shahbaz Sharif and Chief Minister of Sindh Province visited the Chinese Embassy in Islamabad and the Chinese Consulate in Karachi and offered condolences and also strongly condemned the terrorist attack. During his meeting with Acting Ambassador, Prime Minister Shahbaz Sharif also assured the exemplary punishment to the culprits. Do you have any comment on that?

Wang Wenbin: We noted that Pakistani Prime Minister Shahbaz Sharif visited the Chinese Embassy in Pakistan last night to convey condolences. Chief Minister of Sindh Province visited the Chinese Consulate-General in Karachi to express condolences, and launched the rescue, follow-up work, and investigation work in the wake of the incident. Leaders of various political parties and people from different sectors in Pakistan expressed sympathies and condolences.

I would like to stress that the iron-clad friendship between China and Pakistan is unbreakable and any attempt to undermine China-Pakistan friendship will never succeed. We will work closely with Pakistan to resolutely crack down on terrorism and hold the perpetrators accountable for what they did.

China Review News: US Secretary of State Antony Blinken said at a congressional hearing on April 26 that the administration is determined to make sure that Taiwan has all necessary means to defend itself against any potential aggression and that it is focused on strengthening Taiwan’s asymmetric capabilities. What is your comment on this?

Wang Wenbin: I have noted those remarks of the US side. We deplore and reject Secretary Blinken’s statement. Since China and the US established diplomatic ties in 1979, US administrations, including the current one, have all clearly stated that they would adhere to the one-China policy. The China-US Joint Communiqué on the Establishment of Diplomatic Relations and the August 17 Communiqué clearly noted that “the United States of America recognized the Government of the People’s Republic of China as the sole legal government of China, and it acknowledged the Chinese position that there is but one China and Taiwan is part of China.” In the Shanghai Communiqué, the U.S. side also declared that “The United States acknowledges that all Chinese on either side of the Taiwan Strait maintain there is but one China and that Taiwan is a part of China. The United States Government does not challenge that position.” The US admits that Taiwan is part of China, but keeps talking about the mainland’s potential “aggression” of Taiwan. Isn’t this self-contradictory since a country can not “invade” part of its own territory?

The US leadership has stated on multiple occasions that the US does not support “Taiwan independence”. However, the US side has not stopped selling arms to and having official contact with Taiwan, which have sent wrong signals to “Taiwan independence” forces. We have this stern warning for the US side: The historical trend of China’s reunification cannot be held back, and the one-China principle is what underpins peace and stability across the Taiwan Strait. The US side shall not underestimate the strong resolve, determination and capability of the 1.4 billion Chinese people in defending national sovereignty and territorial integrity. Reneging on the commitment will push Taiwan to dangerous waters and bring unbearable cost to the US itself.