Associated Press of Pakistan: On April 11, Shahbaz Sharif was elected as the new Prime Minister of Pakistan. How do you view the future relations between Pakistan and China under his leadership?

Zhao Lijian: We congratulate Mr. Shahbaz Sharif on his election as the Prime Minister of Pakistan. China and Pakistan are all-weather strategic cooperative partners with rock-solid and unbreakable relations. China looks forward to working together with the Pakistani side to carry on the traditional friendship, deepen cooperation in various areas and build a high-quality China-Pakistan Economic Corridor together to forge an even closer China-Pakistan community with a shared future in the new era.

Global Times: A recent poll launched by huanqiu.com shows that close to 90 percent of the surveyed Chinese netizens believe that the US is not standing on the side of equity and justice on the Ukraine issue, but practicing hegemony and bullying instead. What is your comment?

Zhao Lijian: I have noted the poll, which reflects the voice for justice of the majority. The ins-and-outs of the unfolding Ukraine issue are crystal clear. The moves of the US-led NATO have escalated the tension between Russia and Ukraine to the breaking point. The US, instead of taking real actions to ease the situation, has been incessantly adding fuel to the flame, heightening the conflict, forcing other countries to pick sides and creating a chilling effect of “friend or foe”. What could this represent other than hegemony and bullying? The US has also been constantly spreading disinformation to smear China and distort China’s responsible position of facilitating peace talks. It harbors the agenda to shift the blame, instigate confrontation, profit from the situation and seek space to hold down China and Russia simultaneously. What could this be other than hegemony and bullying?

The Ukraine issue has revealed what the US would do in pursuit of hegemony and bullying. But the list of US’ practices of the same nature goes on. Holding on to the Cold War mentality, the US is obsessed with drawing ideological lines when forming closed and exclusive cliques and stoking opposition and confrontation. The real agenda is to prolong US’ hegemony and power politics. Under the go-to banner of democracy, freedom and human rights, the US instigates “color revolutions” that provoke regional disputes, and goes so far as to directly wage wars against other countries that aggravate tensions in the regional and global security situation. The scheme is to cash in on instability for huge economic interests and geopolitical advantage. Willfully wielding the baton of unilateral sanctions, the US also engages in economic coercion that severely undermines the stability of global industrial and supply chains. The move aims at suppressing and containing other countries. Following international law and international rules as it sees fit, the US applies the self-claimed “rules-based order” as the “rules of the gang” to defend power politics and hegemony.

Peace and development represents an overriding trend and gains the overwhelming support. The US’ bullying and hegemonic practices against the trend of the times have been met with stronger criticism and rejection in the international community. The US should face up to the public opinion of the world, including China, discard the Cold War and zero-sum mentality as well as the obsolete thinking of seeking its absolute security at the expense of others’ at an early date, and return to the path of upholding international equity and justice. 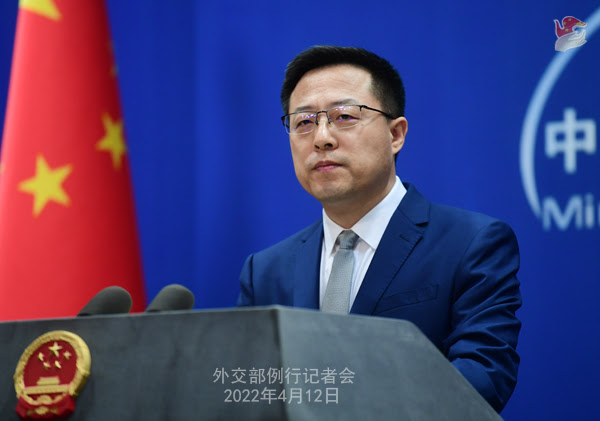 The Paper: On April 12 Beijing time, the “China Travel Advisory” on the website of the US Department of State shows that the US has ordered the departure of non-emergency US government employees and all family members from the Consulate General in Shanghai. This means the “authorized departure” the US announced earlier has now been escalated to “ordered departure”. What is China’s comment on this?

Zhao Lijian: The Chinese side has made clear its position after the US authorized the voluntary departure of some employees and their family members at its Consulate General in Shanghai. Be it “authorized” or “ordered” departure, it is the US’ own decision. I would like to stress three points.

First, China’s anti-epidemic policy is based on science and works effectively. We have every confidence in bringing the new wave of COVID-19 under control in Shanghai and elsewhere. Many foreign nationals including US citizens in Shanghai are pulling together with the people of Shanghai in solidarity to combat the virus and overcome the current difficulties.

Second, competent Chinese authorities and local governments have always provided foreign diplomatic and consular personnel in China with assistance and convenience to the maximum extent possible under relevant policies for their fulfillment of duties pursuant to international conventions. The line of communication between China and the US also remains open.

Third, we deplore and reject the US’ politicization and instrumentalization of the issue of personnel departure. We have made solemn representations with the US side. The US should immediately stop attacking China’s anti-epidemic policies, stop political manipulation under the pretext of the epidemic and stop smearing China. 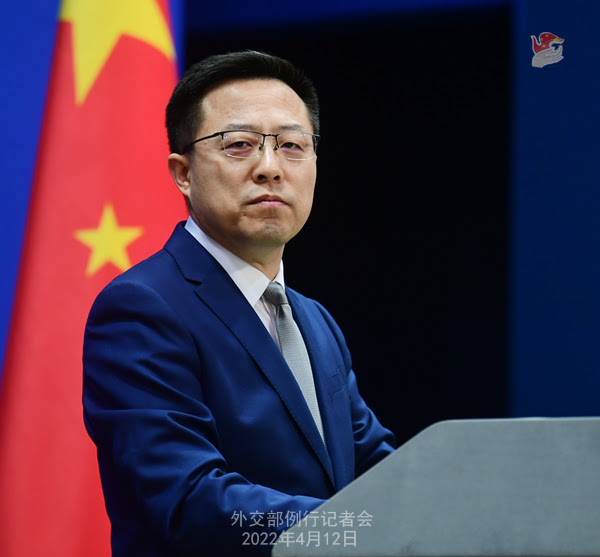 Seoul Broadcasting System: According to ROK media reports, the ROK government discovered a mobile oil drilling structure installed by the Chinese side in disputed waters, or the provisional measure zone, and held a National Security Council meeting to discuss countermeasures. What is China’s comment?

Zhao Lijian: I’m currently not aware of the situation you mentioned. I can tell you that China and the ROK are advancing negotiations of maritime boundary delimitation. The two sides also established the dialogue and cooperation mechanism of maritime affairs. The two countries are in sound communication on maritime issues under existing mechanisms. 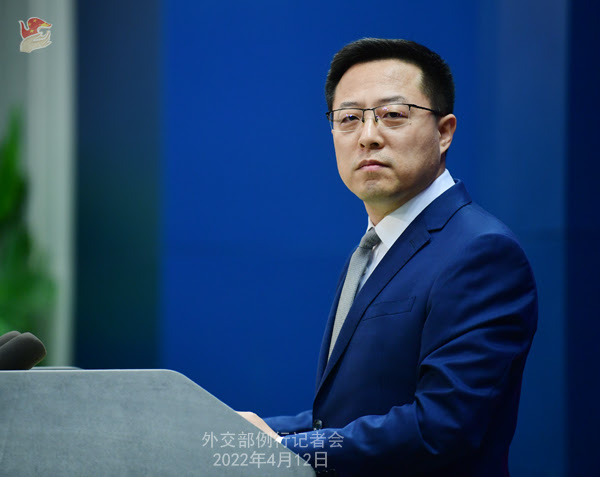 Bloomberg: Sri Lanka has warned creditors of a possible default and suspended payments on some foreign debt, which is an extraordinary step taken to preserve its dwindling dollar stockpile for food and fuel imports. Sri Lanka is looking to borrow $1 billion from China so that it can repay existing Chinese loans due in July. Does the ministry have a comment on the current situation?

Zhao Lijian: To answer your question, China and Sri Lanka have always enjoyed mutual understanding and mutual support since diplomatic relations were established. China has been helping Sri Lanka with its socioeconomic development to the best of our capability and will continue to do so in the future. Bloomberg: The European Union Chamber of Commerce in China said China’s COVID lockdowns have caused “significant disruptions” for many companies. Nearly half of German firms said in a survey their supply chains have been impacted. Does the foreign ministry have a comment on that?

Zhao Lijian: China’s dynamic zero-COVID policy and anti-epidemic protocols are based on science and expert opinions, and consistent with its national realities and the WHO’s guiding principles. They have effectively protected the life and health of Chinese and foreign nationals living in China and made important contributions to the global fight against the pandemic. The international community, the WHO included, has spoken highly of them.

Since last year, some Chinese cities have adopted a host of prevention and control measures in response to sporadic outbreaks. Although these measures have had some impact on daily life and production, the effect is limited in both duration and scope. Thanks to such measures, the vast majority of the population in most regions can enjoy normal life and production. Naturally all prevention and control measures come at a price. All these efforts are worthwhile to protect people’s life and health. Facts have proven that the overall guideline of dynamic zero-COVID is proper as it fits China’s realities and has delivered desirable results. And the numbers of confirmed cases and fatalities and the statistics of economic growth of China all point to the conclusion that China’s COVID-19 containment is among the most successful in the world. By adopting robust and effective containment measures, China is able to maintain socioeconomic growth and, at the same time, make important contribution to keeping the world industrial and supply chains stable and smooth and sustaining world economic growth.

I want to reiterate that the fundamentals sustaining China’s sound economic growth in the long run have not changed, China’s status as a vital locomotive for global economic growth has not changed, and the confidence of the international community in China’s economy has not changed. We are ready to strengthen cooperation with all parties as always to inject impetus into the sustained recovery of the world economy.