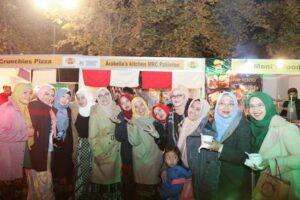 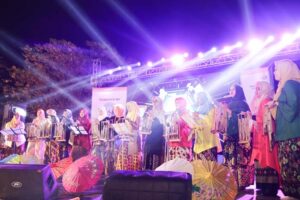 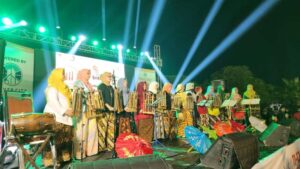 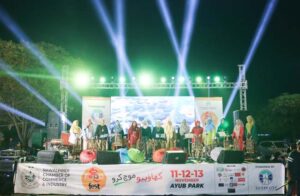 The Ladies of the Indonesian Embassy amazed the visitors of the 2nd Pindi Food Fest 2022 at Ayub National Park, Rawalpindi with “Angklung” performance playing “Ob-La-Di Ob-La-Da” by the Beatles and traditional folksong. Pakistani popular singer, Natsha Baig, performed also at the Festival together with Chef Gulzar, Shan Khan, Bakhsi Brother, Mash Baloch, Hassan Darbuka and others.

Angklung is an Indonesian musical instrument consisting of two to four bamboo tubes suspended in a bamboo frame, bound with rattan cords. Since each Angklung only generates one note or chord several players must work together in order to play melodies. Angklung captures the spirit of cooperation and togetherness of diverse Indonesian society.

The Angklung is closely related to traditional customs, arts, and cultural identity in Indonesia played during ceremonies such as rice planting, harvest, and circumcision. Noting the unique sound and philosophical meaning of this cultural tradition, Angklung was recognized by UNESCO in 2010 as a masterpiece of the oral and intangible heritage of humanity.

Arabella’s Kitchen MRC Pakistan is participating in the 2nd Pindi Food Festival of 2022 and introducing Indonesian cuisines such as Bakso (meatballs), Bakwan (Indonesian Pakora), Siomay, Fried Rice and Noodles, Chicken Satay and Banana Cheese Roll to Pakistani food lovers. Indonesian food stall attracted many visitors who wanted to experience some similarities with Pakistani dishes but were encouraged by the unique flavors of Indonesian cuisines.