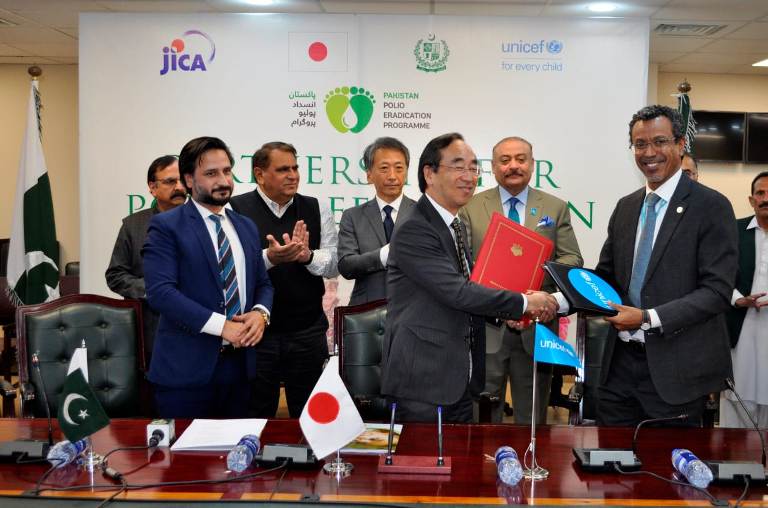 The Government of Japan extended its support to the Pakistan Polio Eradication Programme by providing more than US$ 3.87 million as a grant. The grant will be used for the procurement of essential oral polio vaccine, which will reach more than 18.61 million under five years old children in Pakistan living in endemic and outbreak districts.

The notes of the grant were signed and exchanged between the Government of Japan and the United Nations Children’s Fund (UNICEF) and between Japan International Cooperation Agency (JICA) and UNICEF. Minister Abdul Qadir Patel, the Ministry of National Health Services, Regulation and Coordination and other dignitaries were present during the signing event.

“Pakistan has come a long way in the last 30 years. From thousands of children paralyzed by poliovirus in the 1980s and 1990s, we have managed to reduce the number of cases and affected communities drastically,” said Health Minister Abdul Qadir Patel. Referring to the commitment of the government to polio eradication, the Minister said, “The Programme has successfully restricted virus circulation to endemic districts in Khyber Pakhtunkhwa; we are committed and optimistic about eradicating polio by 2023.” The Minister extended his sincere appreciation for the support of the Government of Japan and partners for their unwavering commitment to Polio eradication.

The Government of Japan has been supporting the Polio Eradication Programme in Pakistan since 1996. The long-standing partnerships have helped to reach millions of children with life-saving vaccines over the years. The grant and loan contribution from the Government of Japan to date has amounted to more than US$ 238.66 million dollars to support the Polio Programme in Pakistan through UNICEF.

H.E. WADA Mitsuhiro, Ambassador of Japan commended the Government of Pakistan and UNICEF for their tireless efforts in emergency vaccination campaigns in southern KP and establishing transit points in North Waziristan to limit the spread of Wild Polio Virus. He also reiterated his continuous support for eradicating poliovirus, by saying that “I would like to renew my commitment to achieve the polio-free world. Japan will continuously support the

Government of Pakistan and UNICEF in this regard. I sincerely hope that the national and sub-national campaigns of the next year will be safe and successful.”

“It is very appreciative that polio program has supported the flood relief efforts in the flood affected districts. Health camps have been opened to provide basic clinical services, treatment of water-borne, vector-borne diseases and immunization for children and women of reproductive age. The Government of Pakistan, UNICEF and Japan has a strong target to achieve polio-free in Pakistan by the end of 2023. I would appreciate the continuous and unwavering leadership and commitment of the Government of Pakistan and UNICEF, with the highest respect to the frontline workers,” said KINOSHITA Yasumitsu, Chief Representative, JICA Pakistan Office.

While polio remains a challenge for Pakistan, the country is facing extraordinary challenges due to recent floods.

“Already these children and families have lost so much, it is imperative that we safeguard them from this deadly disease,” said Abdullah Fadil, UNICEF Representative in Pakistan, highlighting the situation of children and families living in endemic and outbreak districts following the devasting recent floods. “Through the unwavering support and generosity of the people and Government of Japan, more children can now be immunized to prevent the devastation of paralysis and even death. We are now closer to securing a polio-free future for all.”

The programme has made concerted efforts, including working with families at the household level by engaging parents and caregivers and consistently focusing on persistently missed and refusal families. Over 339,521 trained and dedicated polio front-line workers go door-to-door during every national campaign and inoculate vaccines to eligible children. Despite challenges, the Polio Programme has successfully limited the transmission of poliovirus to the endemic region of southern Khyber Pakhtunkhwa (KP), which is a substantial gain. Following the new risk categorisation, the next 13 months are critical for the Programme to sustain the gain and eradicate polio from Pakistan. The timeline for stopping all poliovirus transmission in the current global polio eradication strategic plan is the end 2023.

As a partner of the Global Polio Eradication Initiative, UNICEF has been working with the Government of Pakistan, the Bill and Melinda Gates Foundation, WHO and other partners to make sure the national polio eradication and vaccination programmes reach every child in Pakistan.

Polio is a highly infectious disease caused by a virus that mainly affects children under the age of five. It invades the nervous system and can cause paralysis or even death. While there is no cure for polio, vaccination is the only effective way to protect our children from crippling diseases. Every time children

under the age of five get the polio vaccine; they are more protected. Such repeated immunizations have protected millions of children from polio and made most countries around the world polio-free.