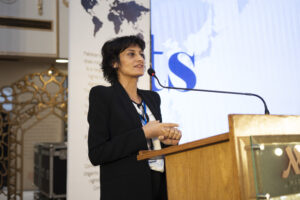 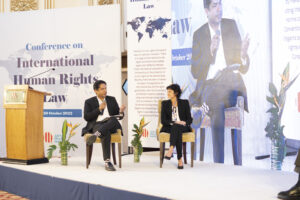 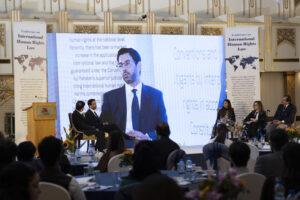 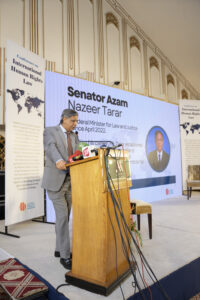 In his welcome note on day one, the Federal Minister for Law and Justice Senator Azam Nazeer Tarar insisted that the “Constitution of Pakistan empowers the superior judiciary and the lower courts to uphold the rights of everyone in Pakistan and to ensure the rule of law.”

The welcome note was followed by the opening remarks by the Acting Australian High Commissioner to Pakistan Her Excellency Joanne Frederiksen, who stated that “this conference is important not only to highlight the progressive efforts being made by Pakistan’s judiciary towards aligning Pakistan’s judicial practice with its international obligations, but also to underscore the importance of sensitising and training as many stakeholders in the justice system as possible regarding the importance of international law.”

The keynote addresses from superior court justices who have presided over relevant cases were followed by panel discussions elucidating the progress and taking stock of the implementation of the provisions of various international conventions in Pakistan.

Each panel was composed of a government official, a representative of a national human rights institution, a representative of a civil society organisation and an international expert to highlight the work being done on the ground in terms of implementing treaty rights, international legal obligations, the challenges faced on the ground and the things that need to be addressed.

The Honourable Justice Ali Baqar Najfi of the Lahore High Court reminded on day one that “Prisoners are not to be hated. They are victims of society.”

Talking about disability rights, the Honourable Justice Syed Shahid Bahar of AJK High Court stated that “the Constitution of Pakistan treats all citizens equally. He then asked “why are differently-abled persons met with discrimination in society?”

The Honourable Justice Jawad Hassan of the Lahore High Court, on his part, remarked that “Pakistan has numerous economic, social and cultural rights in its Constitution, and they are being upheld and provided to the people more and more each day. New judgements are coming out every day, and courts are proactive in upholding these rights.”

On the topic of criminalising torture, on day two of the conference, the Honourable Justice Chaudhry Abdul Aziz of the Lahore High Court stated that “judicial confession, if proved not to have been recorded voluntarily, is discarded. Laws mandate courts to ensure any confession made is voluntary.”

The Honourable Justice Yousuf Ali Sayeed of the Sindh High Court, in his remarks during the final session of the conference on climate justice, quoted a Native American saying that “we do not inherit the earth from our ancestors; we borrow it from our children.”

In his closing remark on the second and final day of the conference, the Honourable Justice Anwaar Hussain of the Lahore High Court stated that “we need to be crystal clear on enforcement of human rights: there can be no justice without honesty. Honesty about the responsibility, honesty about the actions required and honesty about the speed with which we need to act upon, whether it’s justice for the people with disabilities or the enforcement of social, economic and cultural rights or those who have been under detention and, last but not the least, the climate justice.”

Over these past two days, Justice Project Pakistan has brought together stakeholders that normally don’t sit together, from the UN, the superior judiciary, the foreign missions and civil society. This is the first time but hopefully not the last, ” said JPP’s Executive Director Sarah Belal. “We hope to bring to light the progressive jurisprudence emerging from the superior courts of Pakistan, applying international human rights law and the work being done on the ground. A key take away from the conference is a message of hope, optimism and strategic synergies that lead to reform, and the fact that Pakistan will progress if we bring the right people together to work towards solving our systemic problems,” she concluded.

Justice Project Pakistan is a legal action non-governmental organisation which represents the most vulnerable Pakistani prisoners facing the harshest punishments at home and abroad.