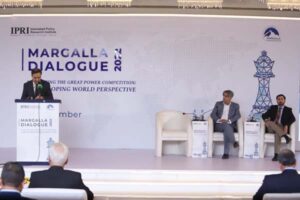 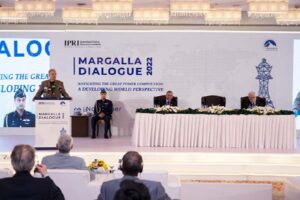 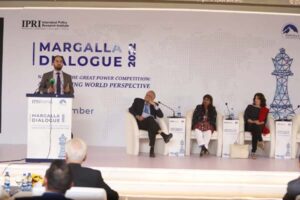 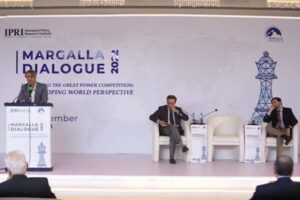 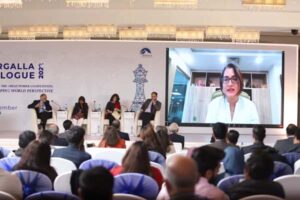 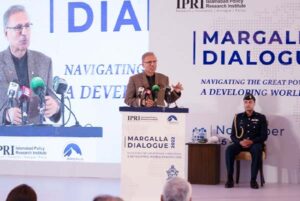 ISLAMABAD: Opening the second day proceedings of the two-day Margalla Dialogue on Thursday in Islamabad, November 17, President Dr Arif Alvi stressed the need for conflict resolution in the developing countries, and remarked that the contemporary world order is in a flux.

He said Pakistan has been trying to come to solutions on all its fronts, and regretted that India has not been able to strike a chord of friendship and cooperation with Pakistan. “Itsa policy of no peace with Pakistan,” he lamented.

The President said international diplomacy can be a major tool in trying to prevent conflicts. He opposed the idea of giving veto powers to emerging nations, and was also irked as to why some of the victor powers are receipt of it.

He urged the need to shun destructive security paradigms and doctrines in international relations, and said that the world order should be based on rules, morality and ethics for making the world a better place for everyone.

He spoke at length on the condemned doctrines such as Mutually Assured Destruction (MAD), Humane Warfare, and Cold War mentality, and observed that they should be discontinued and replaced with a philosophy of Total Peace, where war was completely eliminated.

The theme of the special session of the Margalla Dialogue, an interactive and policy-driven discussion, was on the theme of “Navigating the Great Power competition: Developing World Perspective”, organized by the Islamabad Policy Research Institute, in Islamabad, today. The session was attended by diplomats, foreign dignitaries, members of the academia and intelligentsia.

Dr Alvi noted that destructive philosophies and ideas needed to be replaced with the philosophy of peace where resorting to war was not an option. This, he said, was possible when all nations and nation-states and people living in them were treated with dignity, honour and respect without any discrimination on the basis of colour, creed, race or language. He said that the principle of giving preferred status to some nations in the form of VETO power should have no place in the new world order which, based on experience, had the potential to be misused to bring misery and war to less powerful nations.

The President said nuclear non-proliferation is a good concept but questioned why responsible nations do not reduce or eliminate their nuclear arsenals. He maintained the arms control should be led by the bigger powers.

President Alvi called for enhanced cooperation amongst countries to deal with the issues of global warming and epidemics.

He said there is a need to transform and improve international institutions to respond to emerging threats.

Heremorse that superpowers spent trillions of dollars on creating lethal and powerful weapon systems, adding that even a fraction of these huge amounts could have helped mitigate the effects of climate change and global warming, and eliminated hunger and misery in the world.

The President said that the world was entering another phase of warfare which was even more destructive, lethal and deadly. He stated that Cyber warfare capabilities were being developed at a neck-breaking speed, and could be used for neutralizing the communication networks of a country, making its defence system non-functional, disrupting the provision of services including health services, and rendering the country completely paralyzed.

He said that the immense power of Cyber warfare should be intelligently used, not for the destruction of humanity but for the progress, development and prosperity of the entire mankind.

The President also said that in the current era, social media had resulted in the spread news of fake news and created misunderstandings and violence among countries and societies and it should be countered with self-learning and education and by nurturing our ability to sift authentic news from fake news.

Margalla Dialogue was told that the internal systems of nations should be based upon democratic values of negotiations, consultations and deliberations and engaging relevant stakeholders to build consensus and to decide a way forward. He added that bilateral engagements between the nations, in a fair and transparent manner, should be the basis for resolving conflicts and disagreements.

The President highlighted that there were bigger issues facing the current world order, which included Global Warming and Greenhouse Gas emissions that were threatening many vulnerable countries and negatively impacting the lives and livelihoods of the people in different regions. He said that privileged and developed countries should put their resources together to reverse the damage being done by climate change and to stop the emission of Greenhouse Gases.

The President said that technology should be distributed and transferred fairly to the countries where it was needed the most. He said that the Netherlands, which was 19 times smaller than Pakistan, was among the top food-exporting countries of the world. He added that technology, which was used in creating high-yield food products, drought-resistant crops, manipulation of rain patterns, conservation of water, vertical farming and other such sophisticated and high-tech techniques, should also be shared with the poor and developing countries to enable them to counter hunger, malnutrition, stunting and food insecurity.

The second day of the galvanized dialogue had two Forums on ‘Being human in an age of technology’, and ‘Pakistan at 100’, wherein the panel of experts threw light on how technology is subduing human race and eroding the very essence of human superiority.

The Forum on Pakistan highlighted to what is the social strata of Pakistan and the dynamics of population, economy, decision-making and the role of tangibles such as climate change and the wave of radicalization.