Necessary steps to be taken to increase cooperation between Pak-Iran in law; Azam Nazeer

Home/Current Affairs, Diplomatic Affairs/Necessary steps to be taken to increase cooperation between Pak-Iran in law; Azam Nazeer
Previous Next

Necessary steps to be taken to increase cooperation between Pak-Iran in law; Azam Nazeer

Federal Minister for Law and Justice Senator Azam Nazeer Tarar on Monday said that necessary steps would be taken to increase cooperation between Iran and Pakistan in the field of law and the MoU with Iran to resolve legal issues would be a pleasure for Pakistan.

The minister expressed these views in a meeting with Ambassador of Iran to Pakistan Syed Muhammad Ali Hosseini.

The Iranian Ambassador congratulated Senator Azam Tarar on taking over charge of Ministry of Law and Justice.

They discussed issues of mutual interest and further development of bilateral relations during the meeting, said a press release.

Azam Tarar said that Pakistan had strong relations with Iran.

Iranian Ambassador Syed Mohammad Ali Husseini said that he hoped that relations with Pakistan would be further improved in various fields. Relations between the two countries were good in every field and both countries should further strengthened them, he added.

The Iranian Ambassador hoped that Pakistan would assist Iran in bringing about reforms in civil law and that MoUs would be signed in this regard.

“I and our government wholeheartedly want the best relations with Iran. We welcome your suggestions on legal assistance and will do best for the betterment of both countries and the people,” Tarar said.

He said that Iran’s supreme leader supported Pakistan on Kashmir issue and wanted to further strengthen relations with Pakistan. 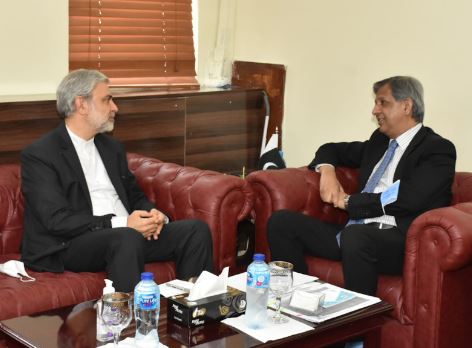