Home/Current Affairs, Diplomatic Affairs/OFFICIAL VISIT OF THE PRESIDENT OF THE REPUBLIC OF UZBEKISTAN TO TURKMENISTAN
Previous Next

On October 20, in the evening, President of the Republic of Uzbekistan Shavkat Mirziyoyev arrived in Turkmenistan on an official visit.

On October 21 in the morning, the motorcade of the leader of the friendly state, accompanied by an honorary escort of motorcyclists, proceeded to the Oguzhan Presidential Palace Complex, where the official welcoming ceremony of the distinguished guest took place.

After the official photographing ceremony against the background of the State flags of the two countries, the head of Turkmenistan invited his Uzbek counterpart to go to the Rowaç Hall, where top-level talks were held in the one-to-one format.

Warmly welcoming the distinguished guest and members of the Uzbek delegation, President Serdar Berdimuhamedov thanked President Shavkat Mirziyoyev for accepting the invitation to visit our country and noted that this visit is considered an important landmark event in the development of interstate relations.

Expressing deep gratitude to President Serdar Berdimuhamedov for the invitation to visit Turkmenistan, hospitality and warm welcome, the leader of the neighboring country Shavkat Mirziyoyev noted that after his election as President of Uzbekistan, the first foreign visit was made to Turkmenistan.

As emphasized, today the interstate dialogue, based on the historical traditions of good neighborliness, respect and trust in each other, understanding of common long-term goals and interests, has reached a qualitatively new level.

Particular emphasis was placed on bilateral cooperation in the trade and economic sphere, energy, transport and logistics, water, agriculture and other areas. As noted, in recent years a breakthrough has been achieved in all areas of practical cooperation. Based on the Roadmap, the agreements reached are being successfully implemented.

Further, in the Soltan Sanjar Hall, the negotiations continued in an expanded format, with the participation of members of the official delegations of the two countries.

The parties discussed topical issues of the regional and global agenda of mutual interest. Particular attention was paid to the topic of deepening cooperation in Central Asia.

The Presidents also confirmed the need to intensify cooperation in the field of science and education, culture and tourism. In 2023, it is planned to hold cross Days of Culture and Cinema, youth festivals.

At the end of the talks, a ceremony of signing bilateral documents took place, during which a solid package of documents was signed.

To the applause of those present, Presidents Serdar Berdimuhamedov and Shavkat Mirziyoyev put their signatures under the Declaration on deepening the strategic partnership between Turkmenistan and the Republic of Uzbekistan. 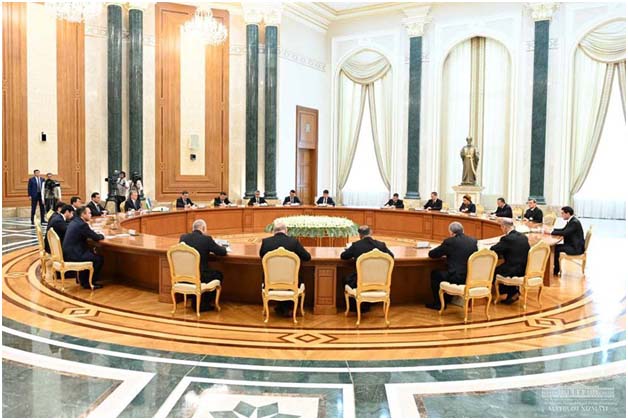 At the end of the document signing ceremony, the heads of the two states addressed the media representatives.

Announcing the results of the high-level meeting, the President of Turkmenistan expressed gratitude to President Shavkat Mirziyoyev, members of the delegation of the Republic of Uzbekistan for constructive negotiations that took place in an atmosphere of openness, mutual trust and understanding.

Expressing deep satisfaction with the talks, which resulted in the signing of a solid package of bilateral documents, President Serdar Berdimuhamedov placed special emphasis on the great personal merit of the President of Uzbekistan in strengthening interstate dialogue, his constant attention to matters of cooperation with Turkmenistan.

On the same day, the President of Uzbekistan ShavkatMirziyoyev met with the Chairman of the HalkMaslakhaty of the MilliGengeshof Turkmenistan GurbangulyBerdimuhamedov.

Chairman of the Halk Maslakhaty of the Milli Gengesh Gurbanguly Berdimuhamedov and President Shavkat Mirziyoyev expressed confidence that the Turkmen-Uzbek cooperation, based on centuries-old ties of friendship and good neighborliness, would continue to grow stronger and successfully develop for the common good.

At the end of the meeting, the Hero-Arkadag presented the Uzbek leader with a Turkmen Alabai, who was called Alabai, and presented a Certificate of his pedigree. 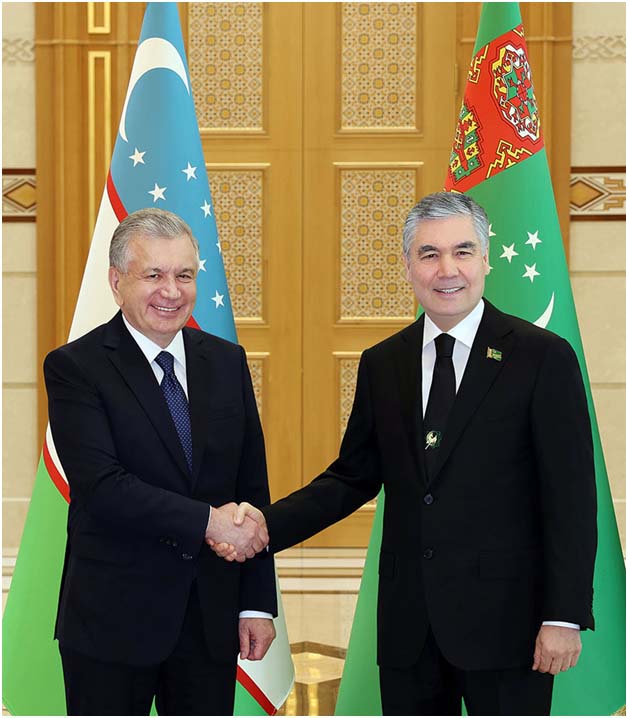 In the afternoon, the President of the Republic of Uzbekistan Shavkat Mirziyoyev, as part of his official visit, visited the Halk hakydasy Memorial Complex. Here, the distinguished guest laid flowers at the Baky Şöhrat monument, which immortalized the memory of national heroes – the valiant defenders of the Motherland.

Having familiarized himself with the exposition of the Watan Mukaddesligi Museum located on the territory of the Memorial Complex, the Uzbek leader left a memorable entry in the Book of Honored Guests.

Then the President of the Republic of Uzbekistan Shavkat Mirziyoyev visited the Magtymguly Turkmen State University, where a solemn ceremony was held to confer the academic title of Honorary Professor of this university on the leader of a friendly country.

Speaking to the audience, President Shavkat Mirziyoyev, expressing gratitude for the honor rendered – conferring the academic title of Honorary Professor of one of the leading Turkmen universities, noted that he regards this as another symbol of the strengthening ties of friendship, good neighborliness and fruitful cooperation between the peoples of Turkmenistan and Uzbekistan.

On the same day, with the participation of Presidents Serdar Berdimuhamedov and Shavkat Mirziyoyev, the opening ceremony of the Tashkent recreation park built in Ashgabat was held.

The head of Turkmenistan met the distinguished guest at the main entrance to the new park, which has become another visible symbol of the indestructible Turkmen-Uzbek friendship.

In the course of familiarization with the park, the Presidents of Turkmenistan and the Republic of Uzbekistan went to the Chaikhana (Teahouse), decorated in the Uzbek style, and get acquainted with the conditions created for visitors.

Leaving the Teahouse, the heads of the two countries went to the area in front of the main stage of the park, where a large screen was installed. Through a direct teleconference organized via digital communication, Presidents Serdar Berdimuhamedov and Shavkat Mirziyoyev took part in the solemn ceremony of laying the foundation of the Turkmen-Uzbek border trade zone – the Trade Center, which took place on the territory of the Dashoguzvelayat.

In the evening, President Serdar Berdimuhamedov gave an official dinner in honor of President Shavkat Mirziyoyev. The reception was accompanied by performances of cultural figures and artists.

Then, Presidents SerdarBerdimuhamedov and ShavkatMirziyoyev proceeded to the Ashgabat International Airport, where they warmly said goodbye to each other, expressing full satisfaction with the results of the negotiations and reaffirming the commitment of the two countries and peoples to the relations of friendship, brotherhood, good neighborliness and full-scale cooperation.

The official visit of the President of Uzbekistan to Turkmenistan and its fruitful results will give a powerful impetus to the further development of cooperation, and the bilateral documents signed during the Turkmen-Uzbek summit at the highest level will strengthen multifaceted, traditionally friendly and good neighborly relations between two countries and its people.