Home/Current Affairs, Diplomatic Affairs/Presidents of Uzbekistan and France Agree on the Development of High-Level Comprehensive Partnership
Previous Next

The Presidents discussed in detail the issues of further building up the Uzbek – French mutually beneficial cooperation and agreed to bring the relations to a comprehensive high-level partnership.

The leaders noted with satisfaction the dynamic development of bilateral ties, deepening a broad political dialogue, the provision of mutual support as a part of the international organizations, the promotion of inter-parliamentary dialogue in the year of the 30th anniversary of the establishment of diplomatic relations between Uzbekistan and France.

The sides expressed interest in further strengthening bilateral cooperation in the field of security, effective counteraction to emerging challenges and threats.

The importance of increasing trade, economic and investment cooperation, in particular, increasing the volume of trade turnover, the number of joint projects and programs with involving the advanced technologies was especially noted.

The results of Uzbek – French business events held on the eve of the visit, during which trade and economic agreements as well as contracts worth over 6 billion euros were signed, were highly appreciated.

The importance of the development of cultural and humanitarian ties was emphasized. The parties supported establishing the branches of the French Alliance in Samarkand, and also welcomed holding the second Uzbek – French educational forum on November 27 – 28 this year in Paris. An agreement was reached on the development of cooperation in the field of training teachers of the French language. 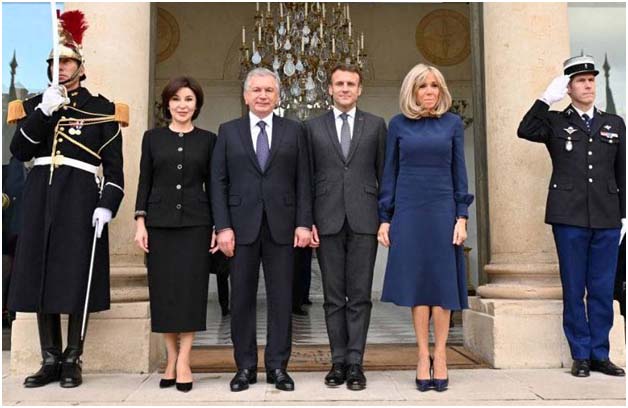 The meeting was held in an open, warm and friendly atmosphere. At the end of the meeting, Shavkat Mirziyoyev invited Emmanuel Macron to visit our country at any time convenient for him.

After high-level talks at the Elysee Palace, President of the Republic of Uzbekistan Shavkat Mirziyoyev and President of the French Republic Emmanuel Macron and their spouses visited the Louvre Museum in Paris.

The exhibition “The Splendours of Uzbekistan’s Oases. At the Crossroads of Caravan Routes”, dedicated to the richest cultural heritage of our people, is organized in accordance with the agreements reached during the visit of the President of the Republic of Uzbekistan to France in October 2018. President Shavkat Mirziyoyev noted the need for organizing joint exhibitions of museums of Uzbekistan and France, to enhance scientific and cultural ties between the two countries. An appropriate memorandum was signed between the Art and Culture Development Foundation of Uzbekistan and the Louvre Museum.

Over the past three years, large-scale preparatory work for the exhibition has been carried out. Several joint Uzbekistan – France expeditions took place, during which many archaeological discoveries were made. Restorers from the Louvre and specialists from Uzbekistan carried out restoration work in several stages.

The result of the joint work was the creation of extensive exhibition space in the Richelieu Hall and the Department of Islamic Art at the Louvre, consisting of five chronological tours: “The Era of the Oasis States and Kingdoms: Diffusion of Cultures on the Silk Road”, “The Middle Ages and the Flourishing of Art”, “The Spread of Islam, the Renaissance in Culture and Science in Central Asia”, “From Avicenna to Genghis Khan”, “The Era of Great Empires: The Age of Timurids and Shaibanids”.

The exposition, covering more than 1,500 years of the history of Uzbekistan, consists of 138 unique items from 16 museums of the country, including 70 exhibits jointly restored especially for the exhibition. The collection also includes 31 exhibits from major museums in France, the United Kingdom, and the United States.

The leaders of Uzbekistan and France, who became the first visitors to the exhibition, accompanied by its curators, got acquainted with historical artifacts from the settlements of Dalverzin-Tepe and Khalchayan, wall paintings from the red hall of Varakhshi, carved panels from Kafar-Kala, pages of the Kattalangar Quran, a double-leaf door from the Mausoleum of Amir Temur, painting with the image of ambassadors from Afrasiab and other exhibits. Detailed information was provided about their creation and discovery, epochs and personalities related to their history.

The heads of state, noting the high level of organization of the exhibition and the special atmosphere created here, expressed gratitude to everyone who contributed to the preparation of this most important event in the cultural life of the two countries.

It was emphasized that the exhibition at the Louvre serves to further strengthen long-standing historical ties, friendship and mutual understanding not only between the peoples of France and Uzbekistan, but also between Europe and Central Asia as a whole. 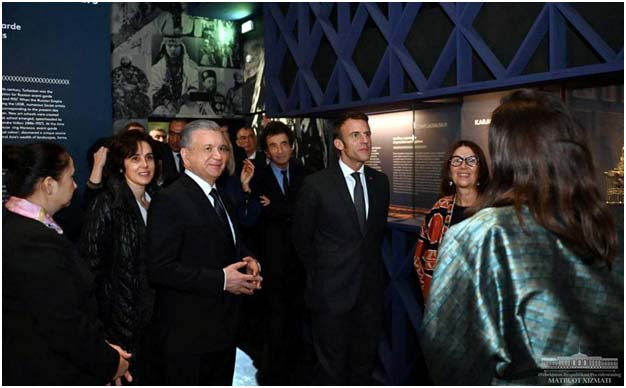 The Institute and the Art and Culture Development Foundation under the Cabinet of Ministers of Uzbekistan have jointly organized an exhibition “The Road to Samarkand. Miracles of Silk and Gold”, which presents the richest tangible cultural heritage of Uzbekistan of the 19th and 20th centuries.

For the first time in France, from November 23 this year to June 4, 2023, more than 300 exhibits from the 9 largest museums in Uzbekistan will be presented to the general international public.

The exhibition includes collections of textiles, clothing and footwear, hats, jewelry, as well as 24 paintings by the Turkestan and Russian avant-garde from the museums of Nukus, Samarkand, Bukhara and Tashkent. 89 pieces of jewelry were restored as part of the preparations.

A tour of the exhibition was held for the Presidents, detailed information about the exhibits was presented.

The French side expressed admiration for the colorfulness and elegance of the products, testifying to the creative genius and skill of our artisan ancestors.

Thereupon, the official visit of the President of the Republic of Uzbekistan to France ended. President Emmanuel Macron and his spouse warmly saw off President Shavkat Mirziyoyev with his spouse.

The two-day official visit of the President of Uzbekistan Shavkat Mirziyoyev to France has been completed.

The Head of the state met with the CEO of the French Development Agency and the business circles of this country. A meeting was held with the President of the National Assembly of France.

The Presidents of Uzbekistan and France held talks at the Elysee Palace, and together with their spouses got acquainted with large-scale exhibitions of Uzbekistan’s cultural heritage at the Louvre Museum and the Arab World Institute.

Following the visit, the heads of state adopted a Joint Statement to develop a high-level comprehensive partnership.

Declarations on cooperation in cultural and historical heritage, preschool, public and higher education, and the development of public service were also signed.

Documents have been signed in civil aviation, the fight against corruption, the professional development of judges, French language training and other areas.

Bilateral agreements were reached on the implementation of priority projects of trade-economic, investment and financial cooperation worth more than 6 billion euros. 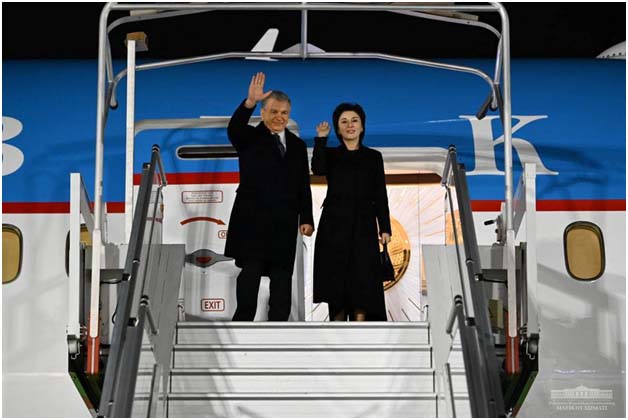 Following the visit, officials of the French Government saw off the distinguished guest at the Paris-Orly Airport. The President of Uzbekistan has departed for Tashkent.