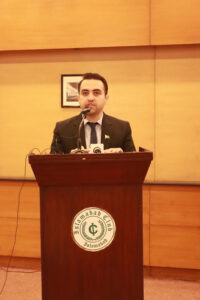 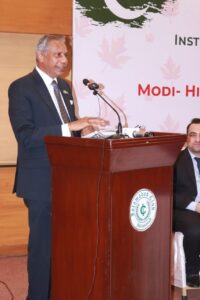 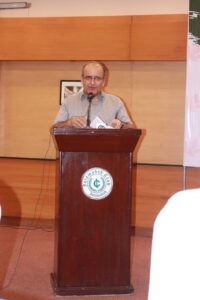 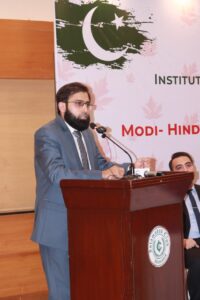 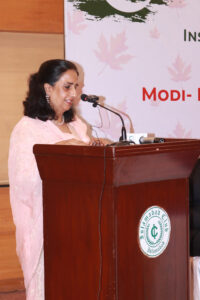 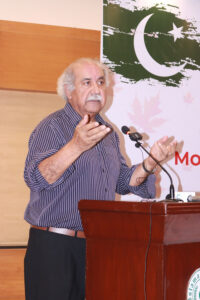 Islamabad ( ) A One-day conference organized by the Institute of Peace and Contemporary Affairs (IPCA) was held at Islamabad Press Club on the topic of “Modi-Hindutva Nexus & the Struggle of Kashmir”. Former Ambassador Naela Chohan highlighted the prominent role of Pakistan in highlighting the Kashmir conflict on national and international forums. India was the first to take Kashmir issue to UN, however since the UN declared Kashmir as an international conflict between Pakistan and India, it backfired Indian aspirations and India backed out. She highlighted the dual standards of international media in refraining to highlight the human rights atrocities carried out by Indian forces in the region. Former Vice Naval Chief and Naval Attaché of Pakistan to India, Admiral Muhammad Haroon, emphasized how Pakistan has always taken the lead in any peacebuilding efforts made in the interest of fostering good relations with India. He categorically stated that war is the only solution in resolving the Kashmir conflict with India. Group Captain (R) Sultan Mahmood Hali spoke about the impact of Hindutva on the Kashmiri freedom struggle. He strongly condemned India’s mass killings and violation of human rights in the region. He highlighted that Indian forces used rape as strategy to demean the Kashmiri women. He urged the need for a proactive diplomacy from Pakistan on Kashmir issue. Assistant Professor Quaid-e-Azam University, Dr. Mujeeb Afzal, highlighted the importance of conflict resolution methods in addressing Kashmir conflict. He stressed the need to assess and evaluate mutually agreeable solutions that are practically implemented including peace diplomacy, mutual negotiations and composite dialogue. He criticized India’s hegemonic and stubborn power enforcement in Kashmir. Chairman Kashmir Youth Association Dr. Mujahid Gillani brought into light the ground reality of Kashmiris in to limelight. He pointed out how Kashmiris are painted and portrayed only as victims, yet they are also warriors and fighters. While highlighting the sacrifices gives by Syed Ali Gillani (RA), Dr. Qasim Faktoo, Asiya Andrabi and Yaseen Malik, he expressed his firm stance of standing with Pakistan as his single identity. Ambassador Salahuddin Choudhry emphasized the importance of a peace-seeking mindset in conflict resolution. He emphasized mutual respect, friendship to all, and malice toward none. He emphasized the importance of diplomatic advancement in overcoming the challenges in the Kashmir struggle and expressed hope that soon Kashmir will be free from Indian aggression and Kashmiris will freely live in their homeland. Executive Director IPCA Hassam Siddiqi said that it is time for common Pakistanis to pacify the Indian passive narratives through following the concept of ‘Jihaad -Bil-Qalam’ as it is the way-forward to impact the national and international media. A brief Q &A session was also held in which participants of the conference enthusiastically participated.