Home/Current Affairs, Diplomatic Affairs/Speech by chairman on the celebration of 55th Anniversary of ASEAN in Islamabad
Previous Next

First of all, I wish to join my ASEAN Colleaguesto express our profound and sincere thanks to Her Excellency Ms. HinaRabbaniKhar,  Minister of State for Foreign Affairsfor her presence and Keynote Speech in the Ceremony today. This is not only a great honor of ASEAN in general and ACI in particular but also shedding the lights for the aim of enhancing the ASEAN-Pakistan relations to a new level.

Our gratitude and deep thanks also go to Ambassadors, High Commissioners, and Heads of Mission from the countries, organizations having the partnership relations with ASEAN whose invaluable supports, cooperation have been remarkable contributingto the developments of our Association.

We also truly appreciate the representatives from Pakistan’s Ministries, Provinces, Business circles, Academies, Medias who have been continuously dedicating their great efforts to ASEAN-Pakistan tie in all fields.

We thank you all forbeing here tonight to celebrate the 55thAnniversary of ASEAN.

ACI would like to take this opportunity to express our deep and profound sympathy, condolences overthe loss of more than 1000 lives resulted from the unprecedented floods, calamities in Sindh and Balochistan recently, we hope Pakistan and the people will soon overcome these natural catastrophes.

On 8 August 1967, ASEAN was established in Bangkok, Thai Lan, druring last 55 years, the Associationwitnessed and responded and successfully overcame difficulties and challenges, and has been growing from strength to strength, developing itself in all fields and pillars.

From a loosegroup of nations with geopolitical, security and ideological driving forces of mobilization, in the last 55 year of development, ASEAN has evolved into a Community of ten states encompassing political-security, economic, and socio-cultural pillars, and sharing an ASEAN identity,UNITY IN DIVERSITY.  The Association has demonstrated adaptability and longevity, today has become one of the world’s most important, reputable and successful regional organizations; the common home shared by 650 million people of the 10 nationswith diverse cultural identities and many similarities.

The advancement of regional integration/connectivity and economic linkage has always been a central aspect of the ASEAN’s integration process over the past 55 years. To date, intra-ASEAN trade accounts for 25% of ASEAN’s total trade turnover. Its GDP in 2021 was US$3.36 trillion, an increase of 30% since the establishment of the ASEAN Community in 2015. In addition, ASEAN is also the heart of a broadening economic space through a network of 8 FTA, including the ASEAN Free Trade Area and seven FTAs with key partners. Notably, the Regional Comprehensive Economic Partnership (RCEP) has formed a free trade area encompassing 30% of the global population, and 32% of the world GDP.Excellencies, Ladies and Gentlemen,

Through its 55 years of building and development, ASEAN took pride in itself to be a successful regional integration model. Its achievements have constituted a strong foundation for ASEAN to fulfill the ASEAN Vision 2025 and to shape a post-2025 ASEAN Vision to further advance an ASEAN Community of solidarity, resilience and responsiveness.

ASEAN has remained true to its mission and goal. It has, therefore, brought into play its important roles in promoting dialogue, cooperation and confidence-building between the countries within and beyond the region with a view to maintaining peace, stability, cooperation and development in the region. All the member countries stand as one to give priority to cooperation in the areas of disaster relief, terrorism and transnational crime combat, maritime security, defence, peacekeeping, counter-proliferation of nuclear weapons, and disarmament; attach great importance to dialogue, goodwill cooperation and responsible contributions for the common goal of peace, security, stability and development in promoting peace and stability through trust-building measures and preventive diplomacy, maintaining the nuclear-weapons-free Southeast Asia, inclusive processes for preventive diplomacy and conflict resolution.

In recognizing the opportunities and challenges facing our region, ASEAN has always stayed true to its path of self-reliance and steadfast in finding a balanced and harmonious approach. Its centrality is maintained without being swayed or drawn into the maelstroms in the region and the world. ASEAN has also expressed its consistent principle and strong commitment to ensuring peace and stability in the South China Sea, a critical sea lane of the region and the world. It is to become a region where the free flow of goods goes unimpeded, where differences and disputes are settled via peaceful means, where the lawsare respected and observed, and common values are upheld. We espouse the 1982 UNCLOS as a framework for all activities at sea. As such, ASEAN expects an early conclusion of an effective and substantive COC, in line with international law and UNCLOS.

ASEAN has historical ties, friendship relations and long-standing multifaceted cooperationwith the Islamic Republic of Pakistan. ASEAN and Pakistan are making more and more efforts to promote stronger cooperation and linkage in all fields, including political, culture, science and technology, education and training, especially in trade and investment.

Trade volume between ASEAN and Pakistan reached approximately USD$ 11.0 billion in fiscal year 2022 and we do believe that this number will continue to increase rapidly in the coming years because the RCEP as well as new economic policies of Pakistan Government will create more favorable conditions for trade between the two sides, promoting the huge potential between ASEAN and Pakistan.

ASEAN appreciates Pakistan in resolving regional issues and achieving significant strides in advancing regional cooperation of Pakistan. ASEAN attaches high priority to further strengthening its multi-dimensional relations with Pakistan, including through enhanced connectivity and people-to-people contacts. We are supportingand hope Pakistan will soon become a full dialogue partner of ASEAN, hence can contribute more in promotingand preservingpeace, stability and prosperity in the region.

Earlier this month, H.E. Federal Foreign Minister Bilawal Bhutto Zardari attended the 29th ASEAN Ministerial Meeting and Regional Forum (ARF) as well met with other ASEAN counterparts in PhnomPenh,thatdemonstrated commitment of Pakistan to further engagement with the region’s affairs. The very important trip of Federal Minister of Foreign Affairs is significant for boosting up the tie; play a role of incentives and shed the lights and direction for the relations to be widened and deepened between ASEAN and Pakistan in the coming future.

We, ASEAN in general as well as 7 members of ASEAN Committees in Islamabad (ACI), including Brunei Darussalam, Malaysia, Myanmar, Indonesia, Philippines, Thailand and Vietnam believe that the relations between ASEAN and Pakistan are remaining huge potentials, especially in trade, economic cooperation, joint ventures and we will do the utmost to realize all chances and opportunities, tofurther develop the relations for the benefit of the peoples of ASEAN and Pakistan.

ASEAN and all of its partners in general and Pakistan in particular, we see many commonalities from the cultures: Cloths, dressing, cuisine; religions: we have Muslim, Buddhists, Catholics and other, Pakistan was a very important part in the process of development and spreading of Buddhism, and also  geographic position SOUTH ASIA, All shows that WE share also the VALUES of UNITY IN DEVERSITY, of INTEGRATIONS AND CONNECTIVITIES FOR DEVELOPMENTS and we strongly believe that we will share and move toward together with all, we will turn the differences into complementary advantages for mutual benefit and developments, for security, peace and prosperity of our countries and peoples. WE WILL HANDS IN HANDS TOGERTHER AND PROSPERITY TOGETHER?

One again, thanks you all forbeing here today with us.We would like to wish you all success and good health! 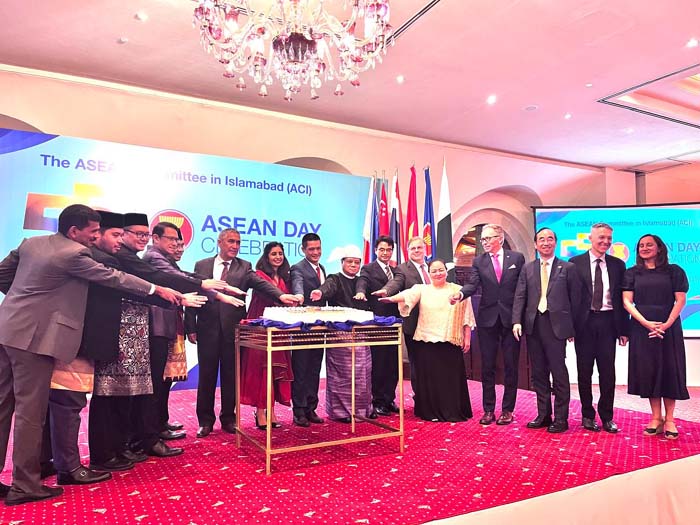 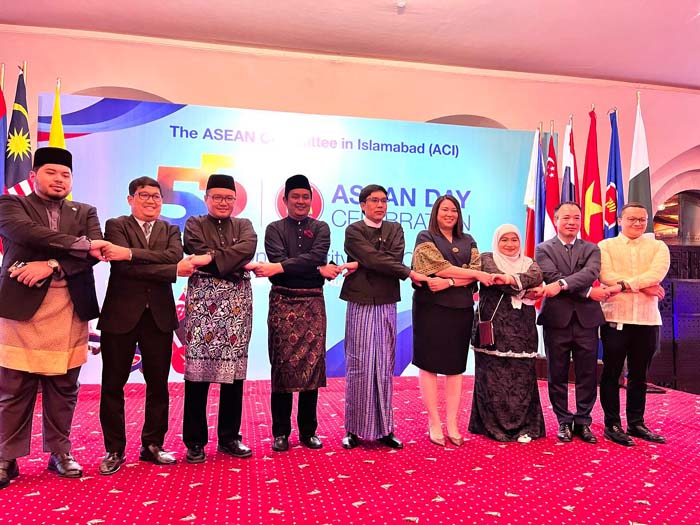