Sustainability in the age of Climate Change: A way forward for Pakistan

Home/Current Affairs, Diplomatic Affairs/Sustainability in the age of Climate Change: A way forward for Pakistan
Previous Next

Sustainability in the age of Climate Change: A way forward for Pakistan

Being a hotbed of climate change disasters, the sustainability crisis in Pakistan is embedded in youth political consciousness, Innovations and Collaboration, cooperation and interconnections. These are key areas affecting efforts towards sustainability and major indicators of climate change governance in the 21st century.  The huge young population of Pakistan is a great resource for sustainable development interventions. Further, the use of digital technologies, infrastructure of innovation and critical thinking along with the idea of partnership leads to maintaining global dignity, prosperity and peace. Climate catastrophes are a major threat for global peace and humanity, and causing major impediments towards meeting the Goals of the United Nations up to 2030.

Pakistan being one of the largest landscapes of South Asia having approximately 300 million population has been under severe climate catastrophes ranging from heat waves to flood disasters. This caused a natural unrest in the regional life and habitat. This alarming situation is not going to end here but encapsulates the Southern and Northern regions of the earth zone. The melting of ice zones and glaciers as well as formation of salinization of sea dried zones is creating a major threat to the mother earth. The idea of sustainability and climatic change are inversely proportional to each other in the midst of large scale industrial production and extraction of natural resources. The hunger of capital concentration and global economic growth are the two major indicators which lead to creating climatic unrest. In this scenario, economic growth and the questions related to the survival of life are contradictory to each other. At this critical juncture of human history, there is a need to structure a balance between economic growth and questions related to life on earth. This is a way through which we can ensure sustainability.

With the generous cooperation of the China-Pak Youth Exchange Community, KORT and other friends, I have mobilized young people along with relevant stakeholders towards humanitarians’ response in flood hit areas particularly in the neglected areas likeDera Ismail Khan, Khyber Pakhtunkhwa etc. Due to rapid and quick and planned interventions, we rescued thousands of women, children and old aged people. Now, my team and I are busy with rehabilitation programs. Special Assistant to the Prime Minister on Poverty Alleviation, Mr. Faisal KarimKundi also belongs to flood affected DI Khan region and contributed effectively in designing and implementation of relief missions in the region. Moreover, we have also launched climate education and resistance programs to facilitate the indigenous and local population in safeguarding ecosystem and biodiversity in different regions of Pakistan. We are also planning to collaborate with the global community to uplift the livelihood and economy of the local population so that they can avail the opportunity of dignified living through sustainable means. 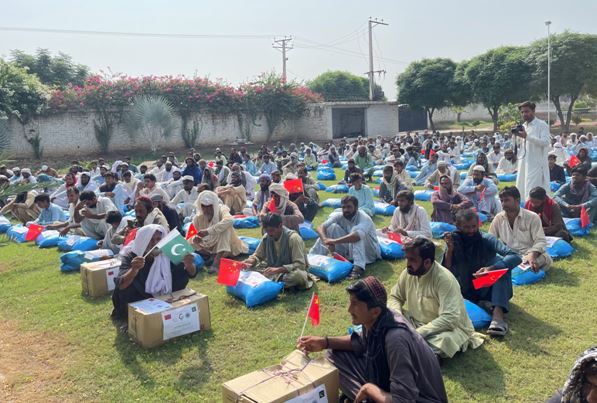 We are working closely with rehabilitation of biodiversity and besides food supply we distributed blankets, tents, mosquito prevention and hygiene kits. This is not only a livelihood support to the flood affectees but it is more than that by imparting civic education and preservation of dignity of life in these affected areas. The local mobilisers, philanthropists and activists were taken onboard for effective service delivery and engaging the locals with climate education. In the history of floods in Pakistan, it has been observed that many religious and militant organisations came to flood hit areas on humanitarian ground and recruited the local flood oppressed people for their nefarious desires and militant operations. These floods remained an opportunity for these interest groups and militant organisations for long decades. This time we entered into humanitarian and relief efforts with sophisticated and well-prepared programs along with climate education to ensure the dignity of indigenous flood affected people.

My suggestion is to include marginalized and indigenous communities to mitigate climate crises and also help them to raise their voices. Further, the accessibility and inclusion of youth in decision making circles is a way forward. Presently the political crises in Pakistan is not the politics itself, it seems more generational crises. The political leadership and even the political party who have more youth accessibility can win the political aspiration of 70% of the population that consists of youth. If the government is willing to mitigate climate change disasters and have political will then it must include the indigenous youth to meet future challenges.

In a Stockholm+50 International Meeting, convened by the UN General Assembly, over 4000 people from nearly 150 countries gathered, including several heads of state and more than 60 ministers, with the purpose to focus on the climate and environment and come up with bold and urgent action needed to secure a better future on a healthy planet. Sherry Rehman, Federal Minister of Climate Change, Pakistan attended the event in Stockholm.

Genuine engagement with youth, their visions, and desires in shaping the future, was featured strongly at Stockholm+50. A youth task force brought together representatives from youth organizations, constituencies, and other young people from around the world, including Pakistan. One of the primary purposes of this Task Force was to put forward policy ideas that represented the demands of young people worldwide. In a Policy Paper produced by the Task Force, young people listed numerous demands calling on world leaders to take drastic action to halt and reverse environmental damage with specific points related to biodiversity conservation. In the lead-up to the conference, there was a six-month-long preparatory process consisting of numerous open consultations. In Pakistan, the Embassy of Sweden in collaboration with the Youth Task Force members and other partners organized a dialogue between youth and key stakeholders in which the youth outlined recommendations that were presented there.

At the meeting in Stockholm, around 300 young people participated, along with several thousand joining online. More than 700 youth also played a role in the Stockholm+50 Youth Task Force preparations for the meeting. From Pakistan, I myself along with four other youth representatives attended the event.

The Youth Policy Paper was mentioned in the official Presidents’ meeting summary. It was not simply mentioned in passing; the presidents specifically encouraged all world leaders to look to it for guidance on implementing the vision of Stockholm +50 and ensuring intergenerational equity.

In upcoming events, the Swedish Embassy in Islamabad, together with key partners, intends to hold a follow-up dialogue with youth representatives, to discuss how the recommendations emanating from the Stockholm+50 meeting can be taken forward, in Pakistan as well as globally.

Furthermore, in the lead-up to COP27 youth need to continue to hold world leaders accountable to the recommendation so that this promising momentum can translate into real commitments. The aim of the event is to provide a platform where key stakeholders are able to listen to the experience of youth and have a discussion on a possible way forward.

The Ministry of Climate Change, Poverty Alleviation and Foreign Affairs of Pakistan play a commendable role regarding spreading awareness and seeking attention to the recent climate crisis in Pakistan. The international campaign including the dedicated visits of various notables like the United Nations Secretary General Antonio Guterres, the youngest Nobel Prize Laureate MalalaYousafzai, International humanitarian Angelina Jolie and many others dignitaries to the flood affected areas is one of the great achievements. Further Government is also sensitizing the issue nationally and internationally by engaging various stakeholders from different parts of the world. There is a dire need to effectively engage children, youth and millennial for climate campaigns as they are the major stakeholders of using modern means of digital communication. As experienced, digital tools and social media have strong influence to engage the target population towards meaningful impact. Through the collaboration of impact technologies, one can integrate the youth, children and millennial on one single platform to support their voices and also influence policy making to combat climate disasters. I personally believe that climate change is a human right issue and protecting human rights is our joint responsibility. This right is deeply connected with the protection of the ecosystem and biodiversity in the region. I also believe that there is a greater need to integrate indigenous youth with digital mode of communication. To achieve this goal there is a need to initiate digital learning and effective use of social media to support policymakers and other stakeholders for effective decision and policy making.

Keeping in view the importance of this young population in regional and global affairs, there is a need to engage them into a dialogue series and workshops on measures on how to turn the recent flood affected region into a zone of environmental innovations and technologies. These dialogues and workshops must cover a number of topics on green recovery, International support in development of the flood affected region, ecologically oriented regional development, afforestation activities at the flood affected bed and many others.

Furthermore, there is also a need to initiate such programmes which aim to encourage sustainable living in the most affected region through building the capacity of teachers, empowering local communities and mobilizing Children and most importantly the rural young people.

The international community needs to initiate and continue the existing assistance for improving efficiency and implementation of innovations in Pakistan by promoting smart and digital communities with favorable infrastructure for empowering youth, women, as well as vulnerable groups of people, including people with disabilities, families headed by women and labour migrants.

With due support of international community, targeted Programmes must be initiated that aim to combine efforts towards: development and implementation of environmental-friendly technologies; integrated implementation of the principles of a “green” economy; mainstreaming of energy- and water-saving technologies; prevention of further desertification and environmental migration; and development of ecotourism and other initiatives.

At present, the youth share in the global population is above 50% while in Pakistan population is 67% and this population has a huge impact on sustainable development having great potential to solve problems associated with the consequences of the Climate Crisis by various innovative solutions.

There is a need to involve youth-led organizations aimed at sustainably improving ecosystems terrains impacted by destructive climatic events. There is also a need to have a stronger resolve towards the international commitments and improve youth engagements climate adaptation. The levels of Climate Finance are far from desirable, and allocation of funds for youth engagement in this respect is even lower.  Egypt will proudly host the 17th UN Climate Change Conference of Youth (COY17) in SharmElsheikh, next month, where thousands of young change-makers from more than 140 countries will gather with one main goal – Saving Earth. I will represent Pakistan at Conference of Youth 17 (COY 17) and will urge all to level-up their efforts towards improving climate finance and listen to informed and politically aware youth calling for urgent action.

Engr. Qaiser Nawab is a Pakistani Climate Youth Leader, UN SDGs Advocate, Freelance Journalist and an expert on Youth Development in the Global South. He can be reached at qaisernawab098@gmail.com