Uzbekistan – Singapore: New horizons for the development of multifaceted cooperation

Uzbekistan – Singapore: New horizons for the development of multifaceted cooperation

On January 17, 2023, within the framework of the state visit of the President of the Republic of Uzbekistan Shavkat Mirziyoyev to Singapore, top-level events were held – negotiations with the President of Singapore Halimah Yacob and Prime Minister Lee Hsien Loong.

The Uzbek-Singapore summit was preceded by an official welcoming ceremony for the head of our state, which took place in the Istana Palace of the President of Singapore. 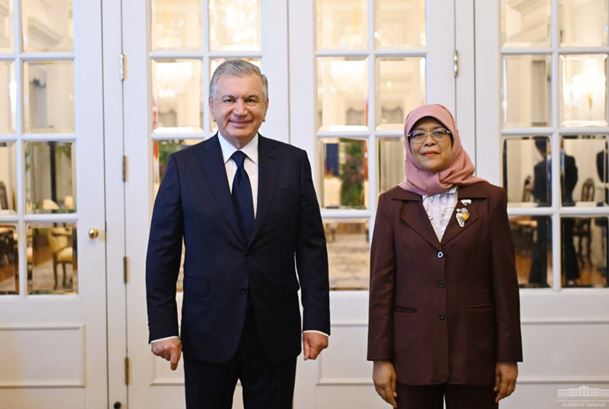 On the square in front of the palace, a guard of honor lined up in honor of the distinguished guest. The military band played the national anthems of the two countries.

President of Uzbekistan Shavkat Mirziyoyev and President of Singapore Halimah Yacob walked around the Guard of Honor and greeted members of official delegations.

Then, a ceremony was held to name a new variety of orchids in honor of the President of the Republic of Uzbekistan – a flower that is the national symbol of Singapore. Such events are traditionally held as a sign of high respect and honor to the distinguished guests of this country and outstanding figures.

This is a beautiful and free flowering hybrid of Encbi Purple and Kila Blue orchids. It produces semi-double inflorescences about 45 cm long, bearing 17 to 20 flowers, each flower about 5 cm across. Lilac-purple petals and sepals have an orchid-purple border.

Then the Presidents held a bilateral meeting.

An exchange of views took place on the prospects for further deepening relations between Uzbekistan and Singapore, cooperation in the field of reforms for the further democratization of social and political life.

Active cooperation in the educational sphere was noted with satisfaction. The Singapore Institute for Management Development and the Singapore Academy of Technology, Management and Communications successfully operate in Tashkent. 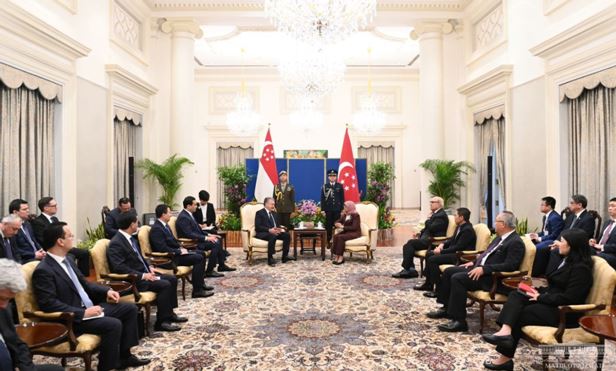 The experience of the two countries in the field of regional cooperation and integration in Central and Southeast Asia is considered in detail.

A high level of mutual understanding and mutual support on international platforms in promoting the initiatives of Uzbekistan and Singapore on topical issues of regional stability and sustainable development was noted.

As a result of the meeting, key areas for the development of interaction were identified.

Shavkat Mirziyoyev invited Halimah Yacob to visit our country at any time convenient for her.

Then, at the Istana residence, the President of our country held talks with the Prime Minister of Singapore, Lee Hsien Loong. 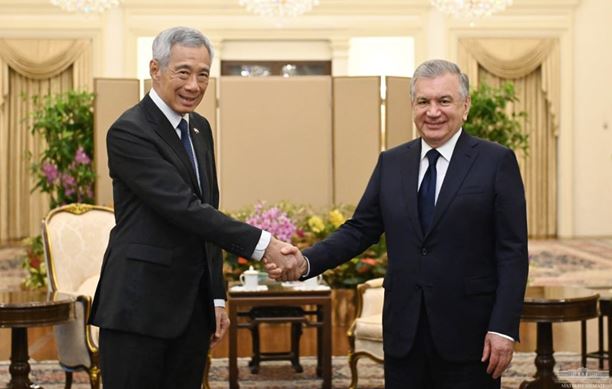 The current state and prospects for interaction were considered in detail, and the positive dynamics of the development of cooperation in priority areas was noted.

Thus, tangible progress has been made on the trade and economic track. In recent years, trade has doubled. The number of enterprises operating in Uzbekistan with Singaporean capital has increased 4 times. Direct investments from this country into the Uzbek economy amounted to $700 million.

The presence of large reserves for building up practical cooperation in many areas was emphasized.

Singapore is the economic center of the Asia-Pacific region. For several years now, the country has maintained the status of one of the largest and most developed economies in the world, relying on successes in such key industries as electronics, chemicals, biotechnology, banking, logistics and transport engineering.

With this in mind, the head of our state identified five key areas of cooperation with Singapore in the near future.

The first is the development of human capital and the training of highly qualified personnel for public administration. An agreement was reached on the implementation, with the participation of the Lee Kuan Yew School of Public Policy, of a joint program to train and improve the skills of civil servants in the areas of management, urban planning, infrastructure development, digital transformation, innovation, education and healthcare. Also, on the basis of the Academy of Public Administration of Uzbekistan, an intensive retraining program for civil servants will be launched with the involvement of leading Singaporean experts.

The second direction is to involve the Singaporean side in the privatization processes in Uzbekistan. In this context, the negotiations discussed the prospects for the implementation of new projects with the involvement of best practices, modern technologies and the management of leading Singaporean companies as part of the privatization of large enterprises in Uzbekistan. It was proposed to create a joint Investment Fund for the transformation and restructuring of state-owned enterprises with a view to further launching IPOs and attracting foreign investment.

The third priority is the attraction of advanced “green” technologies and digital solutions. Opportunities for introducing Singapore’s achievements in the field of digitalization, as well as the application of innovations and technologies of this country in the field of “green” development were discussed.

The fourth is the improvement of urban infrastructure and communications. Measures for cooperation in the field of urban planning and construction, landscaping, and public utilities have been agreed upon. The first step in this direction was an agreement on the establishment in Uzbekistan of a joint Design and Engineering Center for the implementation of infrastructure and industry projects.

Within the framework of the fifth area of cooperation, the importance of supporting investments and expanding mutual trade by promoting joint projects with leading Singaporean companies was noted.

An agreement was reached on the establishment of an Uzbek-Singapore investment company with an authorized capital of $500 million.

In addition, the parties exchanged views on topical issues of the international and regional agenda.

At the end of the meeting, which was held in an open and friendly atmosphere, Shavkat Mirziyoyev invited Lee Hsien Loong to visit our country at any time convenient for him.

Following the talks, a ceremony was held to exchange bilateral documents.

In the presence of the heads of delegations, an exchange of 8 documents took place, providing for the further expansion of Uzbek-Singapore cooperation.

In particular, agreements on cooperation in the field of education, transport, healthcare, and training of personnel, including civil servants, were adopted.

Agreements were also reached on trade and economic cooperation and interaction between the prosecutor’s offices of the two countries.

In the afternoon, the head of our state will visit the Lee Kuan Yew School of Public Policy and hold a meeting with the heads of leading Singaporean companies.